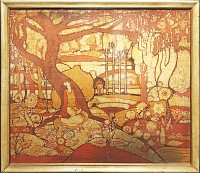 1927-1928 studied in Paris at Academie Collarossi and Academie Moderne with Jean Marchand.

1928 Honored at Paris Spring Salon for design, in batik.

1929 Returned to St. Louis to teach batik at Washington University and exhibit in major museums and galleries.

1956-1957 Sabbatical leave from Washington University to travel in native country of Yugoslavia. Work widely exhibited and seven pieces purchased by National Gallery of Bosnia-Hercegovina at Sarajevo.

1957 Returned to teaching at Washington University.

His artistic gifts were generously given to both school and community.