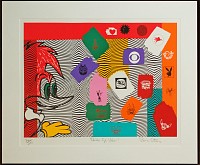 Ronnie Cutrone is a Pop artist, best known for his large-scale paintings of America's favorite cartoon characters, such as Felix the Cat, Pink Panther and Woody Woodpecker. On the surface, Cutrone's paintings are the essence of pop: colorful, lively, and highly accessible. Many of them seem to be offered with the kind of wide-eyed, non-judgmental attitude one might expect from Cutrone, who was Andy Warhol's immediate assistant at the "art factory" during Warhol's most productive and prestigious years.

"Everything is a cartoon for me," Ronnie Cutrone says. "The ancient manuscripts are taken very seriously but they really are cartoons." After a long apprenticeship to Andy Warhol, during which time Cutrone worked side by side with the Pop master on paintings, prints, films, and concepts, he hit upon the style the critics called "Post-Pop" achieving International acclaim with his first post Warhol show.