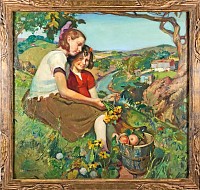 A native St. Louisan, John M. Heller studied at Washington University, the Cincinnati Art Academy and the Pennsylvania Academy of Art and painted alongside some of the great American Impressionists including Richard Miller, Fred Green Carpenter and Paul Cornoyer.  Heller also completed periods of study in Germany, England and France. In fact, while studying in Europe, be sensed correctly that soon the continent would be at war. He purchased, in bulk, the most superior paints and pigments that would eventually be unobtainable and carefully preserved them for later use.  This precise care and attention to detail would come to define his later work.

Heller became best known for his large-scale mural works in St. Louis-area banks, post offices and schools, but up until recently, very few of his individual paintings have been seen at public market.  Kodner Gallery is excited to announce the acquisition of a large collection of Heller’s paintings which have never been on public view.  This collection, which was discovered in a local Missouri estate, includes some of Heller’s finest work. The artist’s great skill is seen in a variety of subject matter, such as portraits, genre scenes and historical works.