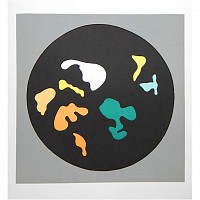 Jean Arp was a painter, a poet and sculptor. He was born on September 16, 1886 in Strasbourg, which is in the area known as Alsace-Lorraine, near the boundary of Germany and France.  His art retained a feeling for life on the border.  He balanced a Gallic playfulness with a romantic mysticism that is essentially German.  (He wrote in both languages).  He longed to escape from the conventional borders of modern life, into a community of the spirit.  He considered realistic art absurdly limited and egotistical.  In 1904 he studied at the School of Decorative Arts, Strasbourg; he took further training in Weimar.  In 1908 he traveled to Paris to enroll in the Academie Julian.  Arp produced paintings that were almost abstract in design.  In 1912 he visited Kandinsky and briefly joined the Blaue Reiter; he showed at the first Autumn Exhibition.

He returned to Paris in 1914 and became friendly with Picasso, Modigliani and Robert Delaunay.  He founded the Dada Movement in Switzerland after World War I, then brought the Dadaist ideas to Cologne.  He married Sophie Taeuber in 1921. She was an important Swiss artist.  More than just an influence, she was an inspiration to Arp.  Her "clear work and clear life," he once wrote, "showed me the right way, the way to beauty."

Arp took part in the Surrealist circle for a short period. He settled in Meudon, outside Paris.  His few paintings all date before 1914.  In his Dada and Surrealist periods he concentrated on collages, in drawings and reliefs, in painting on perforated wood or designs with wool.  He was drawn more to sculpture during his mature years; also engraving, tapestry and poetry.

Jean Arp is one of the gentle revolutionaries of modern art.  Important to the dada and surrealist movements and a significant poet as well as artist, he helped shape the modernist faith.  He attacked the barbarism of the 20th century, mocked the vanity of reason and sought an art of spirital regeneration.  A pioneer of abstract art, he developed one of its principal visual vocabularies: biomorphe shapes that invoke nature. Yet Arp remained free of the angry swagger, the desire to pack the big punch, that characterized many of his contemporaries.  His art is light as air, and his contempt is softened by humor.  He was a twinkling sort of man.  Today nothing is rarer than the light touch.

As a dadaist in Zurich in 1916-1918, he joined Taeuber is making geometric abstract art.  They aspired to the impersonality of divine order and avoided making marks that looked too individual. Arp never made a tight picture.  He allowed a happy relaxation, a formal gaiety into the composition.

Rigorous geometry was more to Taeuber's taste than his, and Arp soon found another way to render his utopian fancies.  He created an imagery that evoked rocks, leaves, twigs, birds.  He did not actually depict such things but suggested the play of nature as it germinates, ripens, decays.  He became increasingly interested in an oval shape, which he would refer to as a navel, a symbol of life itself.

Arp treasured chance - collisions of coincidence, slips of tongue and pen and brush, meetings between strangers.  At such moments the world woke up and the ordinary became remarkable. As he grew older, Arp make simple "constellations" of forms, which suggest the play of both cells and heavenly bodies.  Upon discovering that some of his early works were damaged in storage, he tore them up and remade them into collages - a symbol of decay and regeneration.  The sensous curves of his sculpture, reminiscent of breast and buttocks, invite the caress of a palm.

Nightmares rarely intrude on Arp's dreamy work.  Still, the later art is heavier in spirit.  The accidental death of Taeuber in 1943 depressed him profoundly.  He made a kind of fetish of her memory.  His art, especially the sculpture, became more conventional, less magical. In the earlier work, what's really impressive is exactly what exasperated some people about Arp's creations: the childish throwaway quality.  The art is almost not art.  It lacks finish - finishing would be a kind of death.  It's so loose.  No early work looks like it costs money.  It's as light, as quick, as free as inspiration itself.  A squiggle is a bow tie, a mustache, a smile, a bird.

During World War II, he lived in retirement at Grasse.  At the conclusion of the war he returned to Meudon, near Paris.  He involved himself doing sculpture, writing poetry, etc.  In 1949-50 be visited the United States and completed a monumental wood and metal relief for Harvard University, and a mural relief for the UNESCO Building in Paris in 1958.  He won the international prize for sculpture at the Venice Biennale in 1954,  He died in 1966.

Arp has been called "one of the strangest personalities of this century".  There were few groups to which he was not made welcome and few movements to which he was not attached.  Yet a certain naive and childlike quality remained  distinctive in his art.  He founded no school and had no disciples, yet cumulatively his influence on the development of contemporary art has been great.