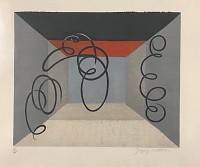 A painter and printmaker, Jacques Villon was known for his Cubist-style works, and is especially noted by art historians for his creation of a purely graphic language for Cubism.  He first came to the attention of the American public when his work was included in the 1913 New York Armory Show, which introduced modernism to the United Sates.  All of his work sold at this exhibition.

He was from a cultured family in the Normandy region of France, and was much influenced by his maternal grandfather, Emile Nicolle, who gave him early artistic training.  Villon was born with the name of Gaston Emile Duchamp, and was the older brother of artists Raymond Duchamp-Villon, Marcel Duchamp and Suzanne Duchamp-Crotti.  Honoring the French medieval poet, François Villon, and so as not to be confused artistically with his siblings, he changed his name to Jacques Villon.

He moved to Paris with his brother, Raymond, in 1894, and enrolled in law school at the University of Paris in order to satisfy his father's wish that he study something practical and not only pursue his interest in art.  Living in the bohemian atmosphere of Montmartre where many artists were active, Villon quickly lost interest in law studies and in 1904 turned to the Académie Julian for art education.

He took jobs with Parisian newspapers doing graphics, cartooning and posters.  In 1903, he along with Henri Lebasque, Pierre Bonnard and Edouard Vuillard and other modernist-leaning painters organized the Salon d'Automne, which exhibited work earning them the name of Fauves (wild beasts) for their paintings that were aggressively garish in color and abstract in composition.

In 1906, Villon moved away from Montmartre to Puteaux, a suburb of Paris and began the serious pursuits of drypoint and intaglio.  Because he was so serious and unassertive about exhibitions, and because he was away from the centers of art activity in Paris, his public reputation was slow in developing.  However, he did earn prestigious recognition including the Carnegie Prize in 1950, the position of Commander of the French Legion of Honor in 1954, and in 1956, the Grand Prize at the Venice Biennale.

He remained in touch with his family, and he and his brothers organized a discussion group that included artists and critics and became known as the Puteaux Group, for the village on the outskirts of Paris where the meetings were held.  Included were Francis Picabia, Marcel and Raymond Duchamp, Alexander Calder, and Fernand Léger.  Members were associated with the art movements of Cubism and Orphism, but they advocated wider interpretations of those styles and had a highly controversial exhibition in 1911 at the Salon des Indépendents.

Jacques Villon died in his studio on June 9, 1963, and three years later, Marcel Duchamp, his last surviving brother, organized an exhibition of his work, which was held at the Musée National d'Art Moderne in Paris.