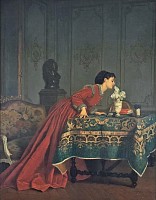 Auguste Toulmouche was a successful genre painter who briefly mentored the young Claude Monet. He exhibited his work at The Salon from 1848 onwards, receiving numerous accolades, including a silver medal at the Salon of 1861 and a bronze medal at the 1878 Universal Exposition. (The Salon, or rarely Paris Salon, beginning in 1725 was the official art exhibition of the Académie des Beaux-Arts in Paris, France. Between 1748-1890 it was the greatest annual or biannual art event in the Western world. From 1881 onward, it has been organized by the Société des Artistes Français.)

Married to a cousin of Monet's Aunt Lecadre, Toulmouche accepted Monet in his atelier in 1862. In the same year he encouraged Monet to enter the studio of the Swiss history painter Charles Gleyre (1808-74), under whom he had also studied. Along with others of Gleyre's students, Toulmouche was briefly associated with the classicising néo-grec style, led by Jean-Léon Gérôme (1824-1904).

Although he also produced portraits and landscapes, he is primarily known for his intimate interior scenes of domestic life. His paintings exhibit the polished, academic style typical of Gleyre and his followers. In 1870 he was made a Chevalier of the Legion of Honour.