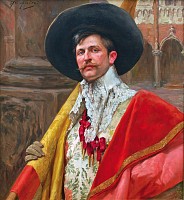 Alex de Andreis' career began as a soldier in the service of the Swedish and later of the Spanish crown.  As a painter he established himself with his costume paintings illustrating romanticizing tendencies, as well as scenes from the military life in the tradition of François Roybet.