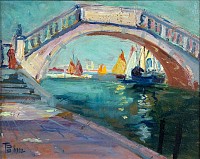 Tom Barnett was a late 19th and early 20th-Century painter and architect, active primarily in St. Louis where he was born on February 11, 1870.   He studied architecture with his father and painting under Paul Cornoyer.

Barnett was head of the architectural firm of J. P. Barnett & Company of St. Louis, but in later years devoted much time to painting.  He earned the following awards:

Gold medal for architecture at the St. Louis Exposition, 1904

His paintings are in the St. Louis Museum of Fine Arts and Missouri State Capitol Art Museum, Springfield, Missouri.