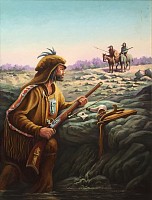 Taylor Oughton is a an award-winning painter and illustrator.  He became an illustrator by trade, and built his reputation on his commissions.  Oughton's subject matter varies, but nature and wildlife are his primary interests.  For more than 40 years, he has illustrated magazines and books.  His work has been featured in publications including: Reader's Digest, Field and Stream, Holiday, Sports Afield, Outdoor Life, Cosmopolitan and the Saturday Evening Post.  Oughton has also designed at the Franklin Mint and for the Lenox Collectibles.  His nature illustrations can be found in the Boy Scout handbook.

Oughton began to do portraits of officers while serving in the Orient during World War II.  After World War II, while still in the Marines, Oughton realized he could make art a career.  He has won prestigious awards from the Philadelphia and New Jersey Art Directors Clubs, the Delaware Valley Artists Guild and the New York Society of Illustrators, among others.