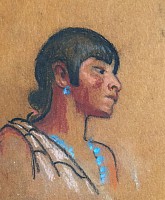 A founder in 1898 of the Taos Society of Artists, Oscar Berninghaus excelled at drawing animals and figures in contemporary garb in Southwestern landscapes. Many of his early paintings were Impressionistic, suffused with color and light.

He was born in St. Louis, Missouri and developed an interest in art through his family's lithography business. He attended night classes at the St. Louis School of Fine Art. In 1898, he was on an illustration assignment for "McClure's" magazine, which took him for the first of many times into New Mexico and Arizona. He had heard of the special beauty of Taos and there met Bert Geer Phillips, who was already a resident, and Phillips invited him to return.

This visit began a tradition of spending the winter months in St. Louis and the summers in Taos. He remained active in both communities, and for many years designed the costumes and floats for the Veiled Prophet parade, a famous annual event in St. Louis.

He also did a series of western scenes commissioned by the Anheuser-Busch Brewing Association to promote a manly, ruggedness theme in their products and to enhance their image as good Americans, an image that was being attacked by suffragettes. In this capacity and without visiting the area, Berninghaus did a painting titled "Old Faithful, Yellowstone" in 1914, which was used as a calendar illustration in the series.

Berninghaus was a sketch artist for the Denver and Rio Grande Railroad to depict landscape of Colorado and New Mexico. In 1912, he joined the founding members of the Taos Society of Artists, whose goal was to promote sales of their work in Taos and other markets. In 1919, he bought an old adobe house near Taos overlooking the town and in 1925 settled there permanently.

He did some painting in surrounding states including Phoenix, Arizona in 1931, where he painted a five lunette mural at the Post Office building of the opening of the west.

His style was one of short, quick brush strokes, which gave his work a unique texture. Early in his career, he painted on site, but later from memory, which was described as being extremely accurate. One of the reasons he was committed to the Taos Art Colony was that he believed it was a distinctly American art, something definitive of subject matter unique to this country. He depicted Indians in a realistic, unromaticized way, going about their lives as they actually did in twentieth-century New Mexico.