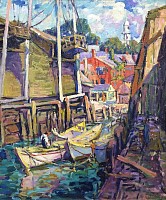 Born in Quincy, Illinois, Kathryn Cherry became one of the most prominent artists in Saint Louis in the early 20th century. She painted landscapes, marine scenes, and floral still lifes in an impressionist style. She began her formal art education at the Saint Louis School of Fine Arts and then studied with Richard Miller at the New York School of Arts and Hugh Breckenridge at the Pennsylvania Academy of Fine Arts.

Cherry started her career as an artist working with porcelain and painted mostly floral subjects. At the 1904 World's Fair, she won the only gold medal awarded to a woman. Beginning 1908, she showed her work regularly at the Saint Louis Artist's Guild, and she was included in numerous exhibits at the Saint Louis Art Museum.

In 1915, she became the head of the art department at Principia Junior College Academy, and at this point turned from painting on porcelain to on canvas. She also painted scenes at Gloucester, Massachusetts where she spent her summers in her Rocky Neck studio.