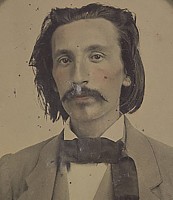 Charles (Carl) Wimar was born in Siegburg, Germany on February 20, 1828, and died in St. Louis, Missouri, November 28, 1862. When Wimar was 15 years old he moved with his family from Germany to St. Louis, Missouri. Prior to the outbreak of the Civil War, the Missouri River was the center of America's fur trading industry. The diverse people and scenery along this route inspired numerous artists, including the young Wimar. During his years in St. Louis, he became fascinated with the Western Frontier, the Native Americans, and the objects they traded. These interests, and their inherent conflicts, became the focal point of Wimar's career. Wimar was no longer content to copy the works of others. Instead, he began studying and sketching Native Americans, artifacts and horses, working in a very systematic process to develop a composition. The focus of Wimar's art changed in 1856 when he returned to the Midwest. The West was no longer a dangerous and uninhabited land. It was now seen as a land of endless opportunity and expansion. In 1858-1859 Wimar made two voyages up the Missouri River to document the land that had consumed and inspired him throughout his lifetime. During the last years of his life Wimar chose not to perpetuate the romanticized myth of the American West, but to create works that objectively document its land and people before both became extinct.